As we have already learned, most of the colors reach the pick of their saturation in the 10 to 70L lightness range. Let us now look at how this range looks in the Curves user interface, which will be our main color correction tool. We will use RGB color model, because this is the one that is most widely used for color representation in digital photography – from interpretation of RAW data from the matrix to basic processing in photo editing software. 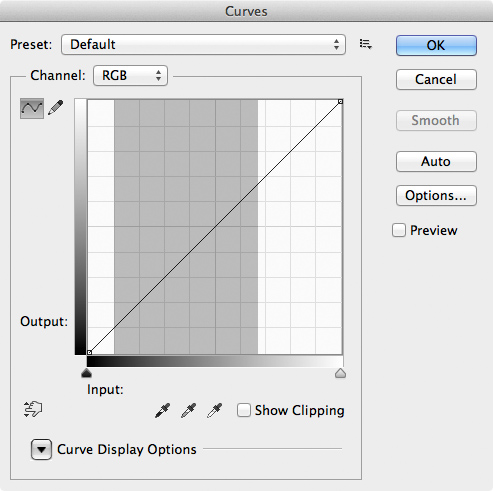 Figure 3.1 shows the 10L to 70L lightness range, marked in grey. It is exactly how this range looks like in the two most commonly used color spaces – sRGB and Adobe RGB1. Here, we can safely assume that to make colors in a picture seem fully saturated, we need to do the following:

1 And, generally in any RGB color space with the gamma value at 2.2

Within the RGB color space saturation is determined by the difference between the lightest and the darkest color channels, so increasing contrast will always lead to increased saturation. Adjusting lightness without boosting contrast is usually insufficient to bring out the colors at the peak of their saturation, since they most likely start out unsaturated even in the desired lightness range (as it often happens with unedited RAW files, for example). 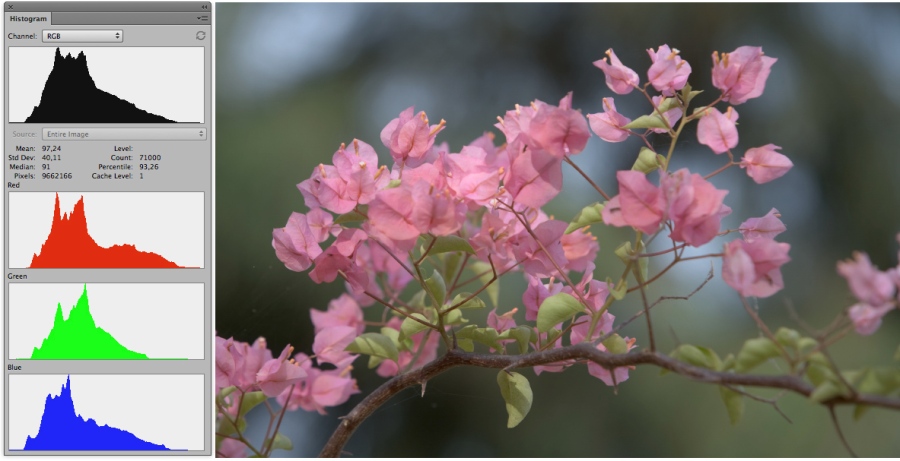 Let me illustrate this point. Figure 3.2 shows an image utilizing the desirable lightness range: its histogram is full from the left range border to the right, with no significant cutoffs in either dark or light areas of an image. One can get a similar image by converting RAW in Adobe Camera Raw (Lightroom) with all lightness and contrast presets (but not white balance) set on “zero”2. The resulting image will lack contrast and saturation, and will look much like a picture you would get if you wished to simply “register” the scene with a camera. Clearly, images like this need post-processing, they are the raw material waiting to be fashioned into an interpretation of reality by the photographer, who will, of course, act in accordance with their artistic agenda.

2If you are running Adobe Camera Raw v.7 and higher or Adobe Lightroom v.4 and higher, just setting all parameters at zero will not be enough to cancel all lightness / contrast presets. You will also need to select “Process 2010” in the Camera Calibration menu 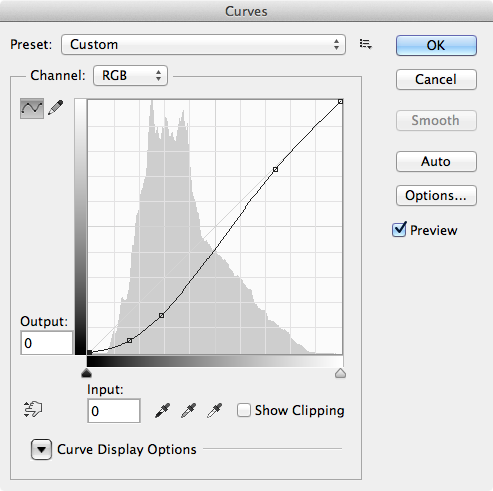 Now, let’s try to saturate the image that we have by increasing contrast and shifting the lightness range to the darker area of the picture. For this, we will need to shape the curve as shown in Figure 3.3. Please, note, that we are working with the composite curve in RGB color space. With some adjustment, you could use the composite curve in CMYK color space to the same end. However, using the L (Lightness) curve in Lab color space for similar purposes might prove difficult, since Lab separates color from lightness, and it is quite different from the way color is perceived by humans. When you are changing L values in Lab, saturation remains stable, and this is where Lab color space differs from reality: our perception of colors (and saturation), as we know, is directly linked to their lightness. At the same time, anyone working with composite curves in either RGB or CMYK should account for a number of color-related “surprises”. Because we are using the ‘master curve’, we end up manipulating all channels at once, which can lead to both expected and unexpected color shifts. If this is something you would rather avoid, your best bet is to either move to Lab color space or work with the composite RGB curve with the Luminosity settings on.

Figure 3.4 shows the result of adjusting composite RGB curve in our image: the picture looks much more saturated. Moreover, thanks to the (reasonably) increased contrast, the variations in the hues become more pronounced, yet the colors do not “scream” or “pop out” too much; the image does not look unnatural in any way. Note, that we have managed to boost saturation by increasing contrast, and we haven’t touched either Saturation or Vibrance settings in the photo editor. Our manipulations also resulted in the loss of detail in deep shadows, which some readers may find unfortunate. To my mind, however, that didn’t constitute any meaningful part of the image, and could be easily disregarded. If you think otherwise, you can always bring the details back by adding a layer mask. This is, of course, just an example done to illustrate a certain point about saturation and lightness. In reality I would have gotten a darker image with more contrast from RAW conversion. If you wish to make your image darker and add contrast, you should be mindful of exceptions to the rule: blue/violet and yellow/orange shades. It becomes important when you are rendering faces, for instance: Caucasian faces tend to have a higher yellow/orange value, so in the process of color correction you will need to lighten rather than darken these tones. I will talk more about color correction and skin tones in later chapters.

Now, let’s see what happens if we try to increase saturation by applying either Saturation or Vibrance tool in the photo editing software. We are going to use Vibrance rather than Saturation, since it is more color-friendly. What we learn from this experiment, however, is that even a value of +100 does not make our image any more, well, vibrant as far as the colors are concerned (Figure 3.5). 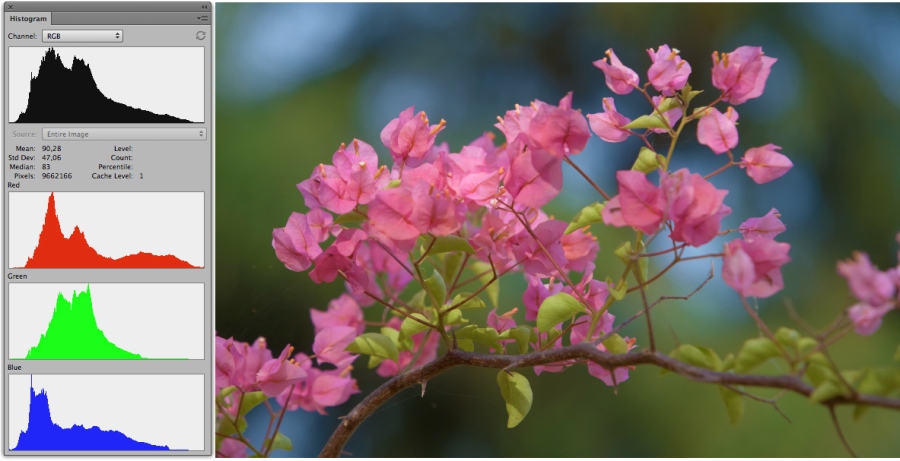 Boosting saturation like this collapses color gradations together and inevitably leads to the dramatic decrease in the number of tones represented in the image, robbing the viewer of much of its color variety. The effect I am describing can be clearly seen if we use the 3D models from the previous chapter. Figure 3.6 shows the changes in color variety with increasing saturation. Should you wish to color saturate a digital image, it is ill advised to use Saturation, Vibrance or similar tools3. If you insist on using these, you need to be very careful: either apply them sparingly or go for minimal value changes. That is not to say these tools are useless. Quite the opposite, they are very valuable when you need to desaturate a selected color or create a complicated layer mask that involves different saturation settings for different hues. Yet I cannot recall any instance where dramatic increase in either Saturation or Vibrance values alone would a more aesthetically appealing color scheme. Writes Valentin Zheleznyakov, “Bright, saturated colors bear amazing creative potential. Nowadays, it is very easy to increase the saturation of a TV image, for instance: just turn up the value, and you will find yourself in the world of Matisse, Gauguin, and others. Right? Of course, not. The ‘forced’ color you get as a result has nothing to do with art, and a lot to do with the technical capabilities of your equipment, but no more than that”.

3These would be the tools that allow direct (i.e. without touching lightness and/or contrast) saturation adjustments in any photo editing software: Adobe Photoshop, Adobe Lightroom, Apple Aperture, Capture One and others. 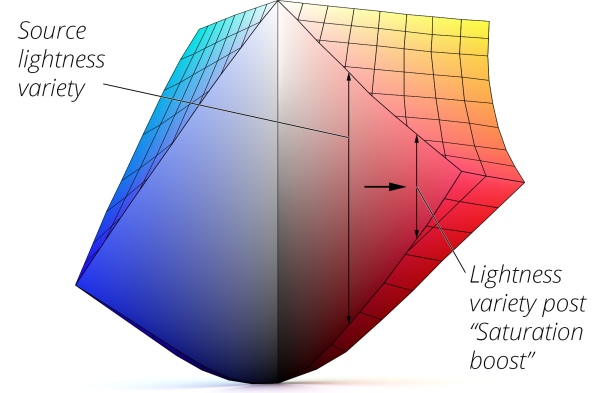 Why, then, in the first image that we edited (figure 3.4) we didn’t see such unpleasant oversaturation as in the second (figure 3.5), although the colors did become brighter? How did we arrive at the tonal richness and variety of color in the first image? The answer is in the contrast. If we increase the contrast of the image, the undersaturated areas of the picture are barely affected – they remain as they were. The more saturated areas of the picture, on the other hand, increase their saturation. So in the end, we get a wider range of color saturation (figure 3.7). 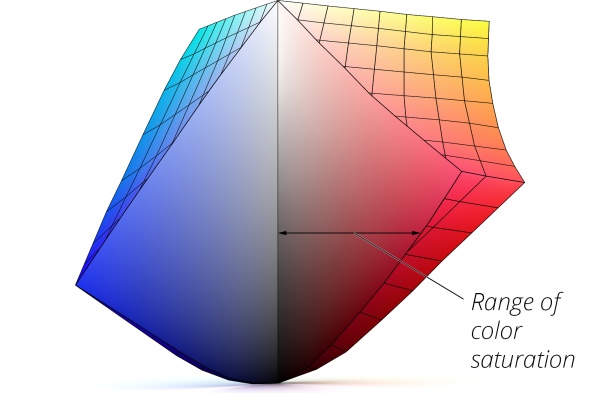 At the same time, the lightness is still high, since the undersaturated colors do not go anywhere (figure 3.8 [a]). When you increase saturation directly, with the help of tools like Saturation or Vibrance, the undersaturated tones become more saturated, and the variety of both lightness and saturation of tones decreases as a result (figure 3.8 [b]). This robs the image of color and ‘flattens’ it out in our perception.

When you modify contrast, saturation increases naturally, and the color variety does not suffer. Photographers who use film do not have an opportunity to influence saturation without addressing lightness. Lightness distribution in emulsion layers is generally determined by the curves of the film. Photographic film often produces pleasant colors (we will later discuss the reasons for it) by adjusting lightness and contrast in a limited range of source colors. It is my firm belief that working with saturation alone while ignoring lightness will never lead to color vibrancy. Moreover, I think that learning to work with color is actually learning to manipulate its lightness. If you get the lightness right (by adjusting the contrast, too), the color will naturally become more pronounced. From an artistic (not a technical) standpoint color cannot be analyzed separately from its lightness4.

4That is why I am wary of working with Lab color space. It is quite handy for internal adjustments on different levels, for color analysis and for a number of practical color correction tricks, but it fails whenever one tries to find a more artistic color solution.

You should remember, however, that by driving the contrast value all the way up you might decrease the number of tonal gradation in areas of high saturation. Yes, increased saturation in this case will look more natural than with the Saturation / Vibrance boost, but you still run the risk of overburning the picture.

To recap: if we want to get a good range of well-saturated colors, we will need to slightly darken the entire image by moving the lightness range to the half-shadows, and increase the contrast in this range. Underexposure5 operates on the same principle and works with the 1/3 to -1 stop. It is used by photographers who shoot directly to slides (with no further processing of the film) or to JPEG (which also prompts direct result). By underexposing an image you get a darker overall tone, and the film curves or camera JPEG settings add contrast.

5One should be careful while underexposing RAW images. Conversion may increase the noise in case you will need to lighten the image in the process.